Anyone who knows me will know of my love of Queens Of The Stone Age, and if you know me I’ll be sure to tell you about how immense it was to see them headline Finsbury Park on Saturday evening. I could go on forever about how it was the best set I’ve ever seen them play in my many, many years of fangirling… A perfect, career-spanning set that included all my favourites (especially excited to hear plenty from 2000’s Rated R). I could also tell you about how I’m still pretty blown away to have seen the legendary Iggy Pop blasting out all the classics in an incredible energy-fuelled frenzy.

But, for now, I want to talk about some of the other bands that joined Josh & co. on Saturday. The event advertised itself of having a line up of 50% female artists (which is what all festivals should be doing, in my opinion…), but personally, my day was at least 80% governed by incredible women in music.

After battling my way through brusque security and parting ways with my Chanel perfume, I make it to the second stage in time to catch Belako – aka my new favourite band. Delivering their gritty slices of post-punk, they treat us to one of the most impressive, most engrossing, sets I’ve witnessed for a long time. Oozing immense scuzzy riffs alongside their raw, swirling energy and gnarly passion, this is a band surely on the rise. And, introducing set highlight ‘Over The Edge’ as being “against gender violence”, one after our own hearts. I’m now thoroughly addicted to their latest release Render Me Numb, Trivial Violence – an album I cannot recommend strongly enough. 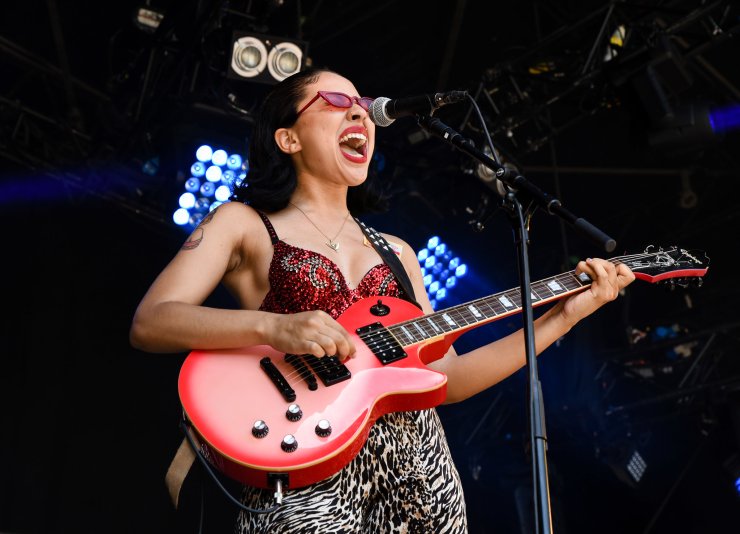 I stay at the second stage for long-time GIHE faves Skinny Girl Diet. It’s wonderful to see them building their reputation and playing such a big event; since first seeing them at The Shacklewell Arms a few years ago, they’ve been wowing listeners across the country. And it’s easy to see why. Oozing their seething, Riot Grrrl-inspired energy and rousing, grunge-fuelled sound, they deliver their fantastically raging offerings to a buoyant sea of fans (some even conquering the heat to energetically dance along), whilst taking the time to thank the crowd for being “angels”. A sparkling, impassioned set from one of the most exciting bands around, and one we need now more than ever.

I finally make my way to the main stage to catch blues-rock duo Deap Vally. Less of an intimate experience than the second stage, or indeed when I was right at the front for last year’s gig at Islington Assembly Hall, they still maintain all the empowering passion and glorious, gritty aggression that I’ve come to love about them. Delivering tracks from both albums, as well latest singles ‘Bring It On’ and ‘Let Go’, their raging feminist anthems prove every bit the immense spectacle to behold as I remember; their vibrant, glitter-filled energy spanning the distance between me and the stage, and filling the scorching air with joy. 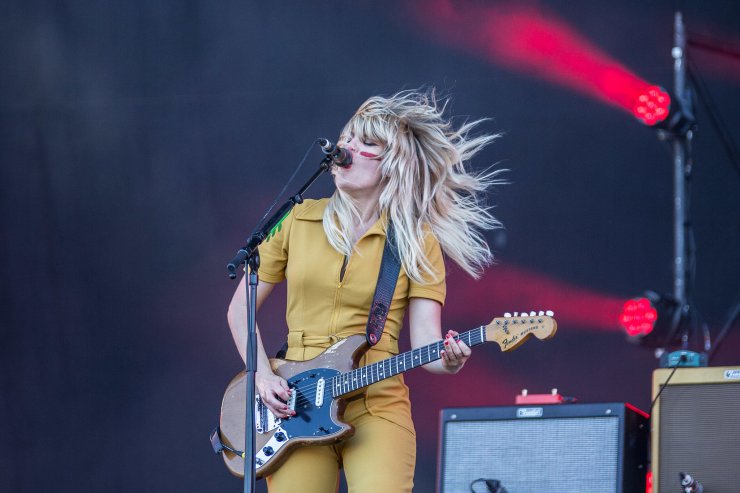 Returning to the intimacy of the second stage, I’m greeted by the truly infectious charisma and sunny charm of Madrid’s Hinds. Kicking things off with ‘The Club’, as always the band exude their joyous, jangly scuzz as they reassure us that “… we’re all, all of us here, friends with Queens Of The Stone Age!” With each moment spent with this band, the sheer sense of glee heightens, such is the sunny spirit of Carlotta, Ana, Ade and Amber. Propelled by an unrelenting, uplifting energy, a vibrant cover of Kevin Ayers’ ‘Caribbean Moon’ sees the crowd dance along in buoyant bliss to the band’s ‘choreography’ on stage. With a set including “classics” such as ‘Bamboo’ and ‘Chilli Town’, Hinds once again leave me grinning from cheek to cheek, their euphoric offerings the perfect accompaniment to the summer sun. 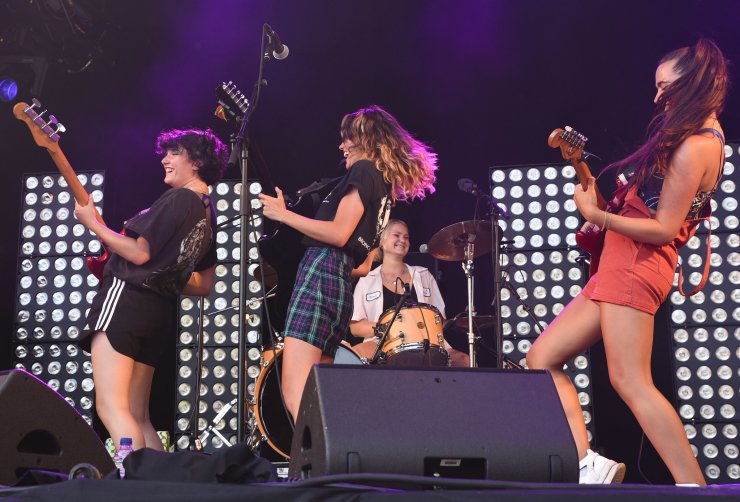 After a short interlude, Brody Dalle appears. And, as if that wasn’t enough, she’s accompanied by two more of the most awesome women in rock – Ayse and Fay from Savages. Immediately exuding her immense sense of cool, opening with the riotous force of ‘Rat Race’, she doesn’t seem to have lost any of the seething, angst-driven power that we’ve all come to know and love. As she blasts out her raw, husky vocals, a pretty surreal sense of excitement comes over me; being in the presence of such a personal hero. Despite not playing any old Distillers tracks, it’s a short, sweet and hugely empowering set (just six songs, all from 2014’s Diploid Love) that leaves me as much in awe of her as I was when first seeking refuge in her gritty strength as an emotion-filled teen. And I’m clearly not the only one overcome by Brody Dalle; it’s incredibly refreshing to see her continuing to be an influence, as a young girl in front of me sits upon an adult’s shoulders, rocking out to every single impassioned growl.

Queues for beer and perfume-banishment issues aside, Queens Of The Stone Age and Friends was a wonderful day of some of the best music by some of the coolest people. The best kind of day, filled back to back with incredible music spanning genre and gender, all accompanied by dazzling sunshine.

Anyone who knows me will know of my love of Queens Of The Stone Age. Anyone who knows me will also know of my love of championing women in music. So, although I am EXTREMELY excited about seeing QOTSA and the legendary Iggy Pop next Saturday, 30th June, in Finsbury Park, I’m also particularly looking forward to the rest of the incredible line up, which is 50% female…

Brody Dalle:
I have been wanting to see Brody Dalle since I was a 16 year old listening to The Distillers’ Sing Sing Death House for the first time, and being completely blown away by her seething, riotous power. Catch me at the front re-living my teenage angst.

Deap Vally:
Blues-rock duo Deap Vally are the band I turn to whenever I need some motivation. Their empowering passion and glorious, gritty aggression when delivering their raging feminist anthems is really an immense spectacle to behold.

Hinds:
Having seen the Spanish band Hinds three times before, I can assure you they will not disappoint live. Their infectious, sunny charisma never fails to put a smile on my face, and their immense, buoyant energy creates a sweeping sense of raucous euphoria whenever they perform.

Black Honey:
Fronted by Izzy B Phillips, Brighton’s Black Honey have been building quite a reputation over the last few days, receiving acclaim from the likes of The Guardian and NME for their lush, swooning vocals and catchy, jangly melodies.

Belako:
Second Spanish band of the line up, Belako are known for delivering catchy slices of post-punk and their recent album Render Me Numb, Trivial Violence is a gritty collection of raw, swirling offerings.

Skinny Girl Diet:
Long time favourites of GIHE, it’s wonderful to see Skinny Girl Diet building their reputation and playing such big stages. I first saw them at The Shacklewell Arms a few years ago, and they blew me away with their seething, Riot Grrrl-inspired energy and rousing, grunge-fuelled sound.

Catch all these bands for QOTSA & Friends in Finsbury Park next Saturday 30th June. More info and ticket links here.

For most of us, a musical life spent mixing with the great and good of US alt.rock and British trip-hop might be sufficient. But following a twenty year career of collaborations with Queens Of The Stone Age, Mark Lanegan and UNKLE, Wendy Rae Fowler now brings us her debut solo album: Warped. Now based in the UK, and collaborating with London’s finest (including GIHE fave Jemma Freeman), Fowler has tied together the strands of alternative, experimental rock, from both sides of the Atlantic – and her album has both the cinematic feel of US desert/post-rock and the gloomy clouds of its British cousin.

Opener ‘Hollow’ is an infusion of post-punk and post-rock, with its throbbing electronic motif, aching guitar and vocal distortion in the style of Fever Ray. It’s a style that appears later, on first single ‘Svengali’, although with a darker, fairytale opener, and a move into a trip-hop feel at its close.

‘Volcanic’ takes things in a more ethereal direction, still carrying the sense of Bjorkian electronic interference in its spacey heft. Elsewhere, there’s the legacy of other female performers – the goth folk of PJ Harvey’s Is This Desire? and To Bring You My Love on ‘Lying in the Sun’ and ‘Red Dust’; Nina Simone on the cover of ‘Plain Gold Ring’.

The latter encompasses an element of psych’s dark blues with its multi-percussion particularly reminiscent of GOAT. Second single ‘Run’ and ‘This is Not a Love Song’ take the listener to a twisted version of the old Wild West, with smatterings of twanging guitars and Rawhide cowboy backing vocalists.

Finally, the album concludes with the glistening shine of ‘Hollow Ground’ – a brooding epic instrumental whose electric lights twinkle through a bassy city smog, conjuring a tumble-twist in the mind’s eye of landscapes, both urban and natural. It’s a fitting conclusion to an album of light and shade, of space and density.

A powerful and moreish cocktail of cinematic sounds and bewitching vocals, Warped is a kind of neo-noir soundtrack to a movie that should, but doesn’t yet, exist. Rae Fowler’s sense of narrative is as strong as her musical nous, and her debut is a brilliant continuation of an already storied career.

Warped is out 30th March.