Having previously charmed us with the swirling energy of previous single ‘In My Room’, London band Ennieloud are back with a bewitching new single.

A poignant reflection on the twin poles of femininity, ‘The Best I Can’ oozes a soulful, upflifting groove alongside immersive throbbing basslines and the deep, impassioned power of front woman Cassandra’s spellbinding vocals. A musically rich soundscape, offering an empowering and sincere expression of inner strength in the face of adversity. Of the track, the band explain:

“It’s about the remarkable inner power and resilience of women, taking the form of a dialogue between the strong and the weak in all of us. Even if we feel so fragile sometimes, we have a great inner strength that can guide us to our dreams. Dream and be strong!”

Listen to ‘The Best I Can’, for the first time, here:

‘Disco’ is out now via Alcopop Records.

Set to release their upcoming fourth album next month, London duo Katy Young and Rosa Slade – aka Peggy Sue – create beautifully captivating offerings filled with luscious harmonies and a shimmering energy. A celebration of self love, the reverb-strewn, uplifting sound of latest single ‘In Dreams’ showcases all their is to love about them, a band who have now found themselves again after a four year hiatus.

We think one of the best ways to get to know a band is by asking what music inspires them or influences their writing. We caught up with Katy and Rosa, who have shared their “Five Favourites” – five tracks that particularly resonate with them. Check out their choices below, and scroll down to listen to watch the new video for latest single ‘In Dreams’ at the end of this post.

Porridge Radio – ‘Lilac’
Katy:
I fell in love with this song last summer, when we played a show for She Shreds with Porridge Radio at Great Escape. The refrain “I don’t want to get bitter, I want us to get better, I want us to be kinder to ourselves and to each other”, really spoke to me then and is a pretty good rule for life to be honest. I may or may not have recorded a sneaky bootleg on my phone at the time, but luckily it’s now out for real and sounds much better. They have a new album coming this year that I’m excited for.

La Luz – ‘Sure As Spring’
Katy:
We did a support tour with La Luz in 2018 – there wasn’t really any reason for us to do it because the record wasn’t finished, but it was exactly what we needed to kind of force us into being a band again properly. I think their music has been a big influence on this new album – their sound is obviously incredible but it’s also clear and cohesive and consistent in a way that I think we strived for. Taking influence from lots of places is really important, but there’s something really powerful in turning all of that into one continuing sound that is all your own, which is something we’ve really tried to do on Vices more than we ever did before. But probably even more than any of that, being on the road with those girls was really inspiring, and their encouragement and support was a massive confidence boost exactly when we needed it.

Big Thief – ‘Paul’
Katy:
It feels like it’s so much rarer that I become totally obsessed with a band now – something that felt like it happened about once a week when I was younger. But Big Thief have been a bit of an exception to that in the last few years. At least five friends sent me this song, knowing I would love it. It’s so beautiful and tender and catchy as hell. I have probably had the first line in my head for three years straight.

Beth Gibbons – ‘Tom The Model’
Rosa:
It’s kind of a cheat to choose this song; the chorus borrows so much Nina Simone’s ‘Do What You Gotta Do’, another of my all-time favourites, it’s a bit like sneaking two songs into one choice. When it bursts into that chorus, it’s the ultimate release after the slow creeping verses. The horns and strings are lush and kind of ominous. Beth Gibbons’ voice soars – walking that line between delicacy and pure force. I’ve always liked that she embraces darkness so unapologetically, and can make sweetness or desire as threatening or powerful as they are gentle. Listening to her music always feels like a solo experience. It’s impossible for me not to enter into the world her songs create wholly.

Landshapes – ‘Red Kite’
Rosa:
I love this song – it has made me cry perhaps every time I have watched Landshapes perform it. There’s a deep feeling of pride watching close friends play a song you think is truly objectively beautiful. The song just builds slowly and surely like this swelling wave. Jemma’s guitar solos have the ability to shift Landshapes’ songs into a totally different place, and when Luisa sings “in the face of everyone I swear this time I’m done”, it’s like this wave crashing down in a sort of haunting catharsis. Dan, Landshapes’ drummer, also played drums on Vices, and it’s a joy watching and listening to the different things he’s brought to both bands.

Massive thanks to Katy and Rosa for sharing their Five Favourites with us!

Vices, the upcoming fourth album from Peggy Sue, is out 21st February via French Exit. Watch the new video for ‘In Dreams’ here:

Ringing in 2020, Scottish-Sudanese singer Eliza Shaddad releases her new EP Sept-Dec. The songs focus on different forms of connection with other people, dealing with sex, normalcy, and friendship.

Opener, ‘One Last Embrace’, is a grungy and atmospheric exploration of the swirling emotions of desire. The chorus and scratchy guitars surge throughout the song to a powerful crescendo like “a tidal wave, pulling me asunder”.

‘Same As You’ has a lighter, dream-pop sound, featuring chiming guitar and layered vocals. The mood is bitter-sweet, capturing the nostalgia of a craving a connection between two people, despite their differences. In a similar vein, ‘Girls’ explores the memories of a close female friendship, both good and bad. The song builds slowly before the sound fills out to an emotional chorus – “I know you’re lying when you say you’re alright”. We get a sense of someone or something breaking down.

There is much to cherish in this EP; a collection of confessional songs which allow a connection with the listener through a sense of shared experience, delivered through the lens of late ’80s/ early ’90s-inspired guitar pop.

Sept ~ Dec is due for release on 24th January 2020. Eliza is currently on tour supporting Keane, see all the details here.

Following last year’s ‘Breakfast’, and support from the likes of Huw Stephens, John Kennedy and BBC 6Music’s Marc Riley, Manchester/Chester based trio Peaness have now returned to our ears with their new single ‘Kaizen’.

An instantly catchy blast of hope, it’s propelled by jangly hooks and an uptempo energy, as sugar sweet vocals and twinkling harmonies flow. A reflective and honest dose of ‘Pea-Positivity’, ‘Kaizen’ is the perfect antidote to these grim January days. Of the track, the band explain:

“It’s a song to remind myself that with every act of kindness and every crime, we affect the future, and that those choices go on to shape others, and our beautiful planet, long after we’re gone. The word ‘Kaizen’ is a Japanese word that literally translates to ‘change for the good’, and that’s what we’re hoping for.”

Peaness are about to embark on their biggest UK tour to date. Catch them live:

Following a host of amazing bands playing for us throughout 2019, including Screaming Toenail, Salad, GENN, Chorusgirl, Witching Waves and CLT DRP, we were back at The Finsbury on Friday for our first gig of the year, with another dream of a line-up, for a jam-packed night of the best live music.

Kicking things off is the dreamily delightful ‘heartland rock’ of newly formed Athabaska. Alternating between the impassioned, crystalline vocals of Faith Taylor (Suggested Friends) and the delicate emotion of those of bassist Roxy, they treat us to a heart-warming shimmering folk-strewn musicality and luscious sweeping harmonies. 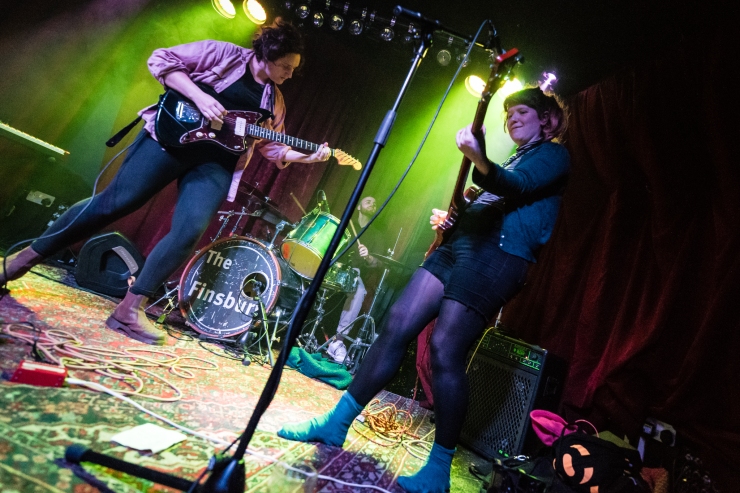 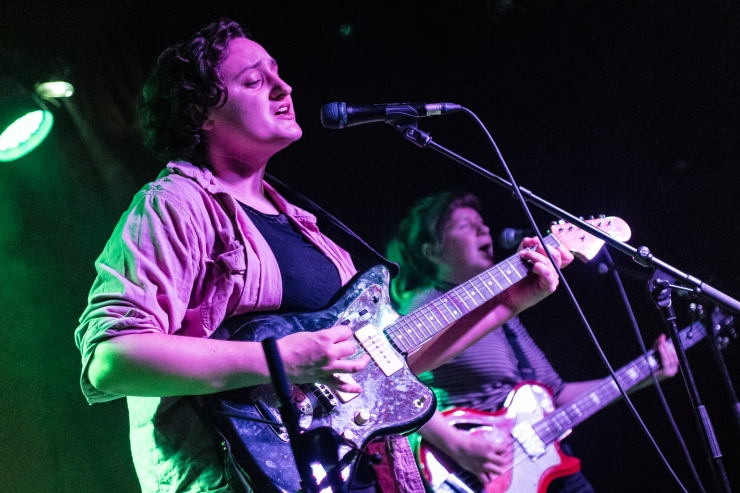 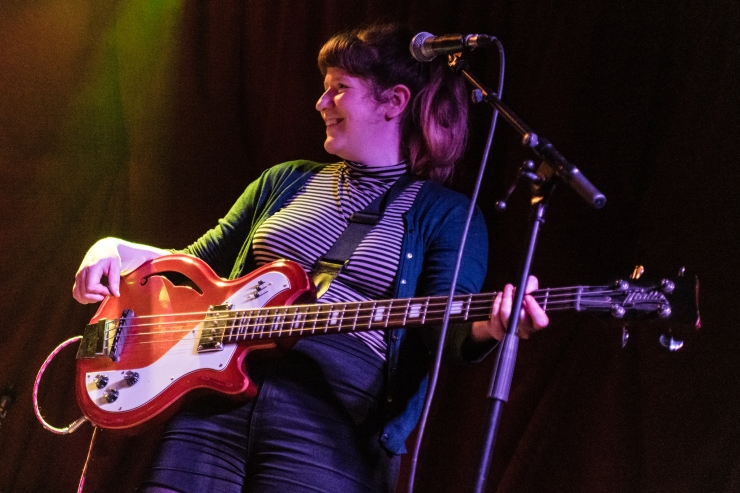 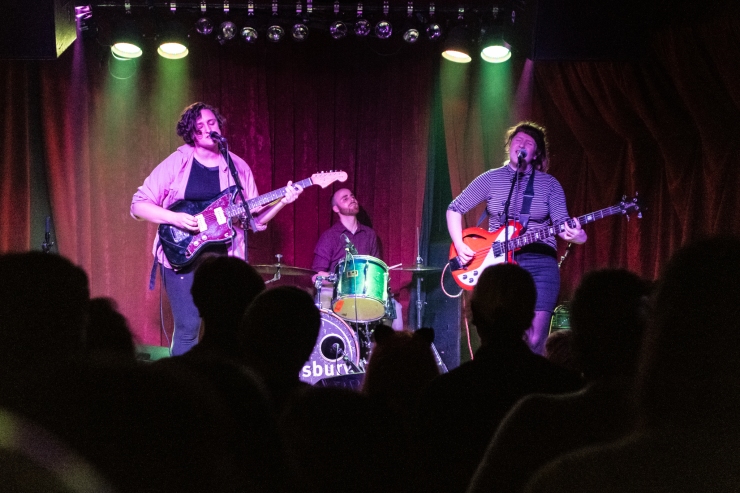 Next up Nun Habit deliver their fuzzy, infectious garage pop with a unique, quirky energy. With shades of the jangly synth-driven soul of the likes of Young Fathers, whether guitarist Gregory or bassist Kate is leading the vocals, they ooze a vibrant spirit and immersive, sparkling charisma. 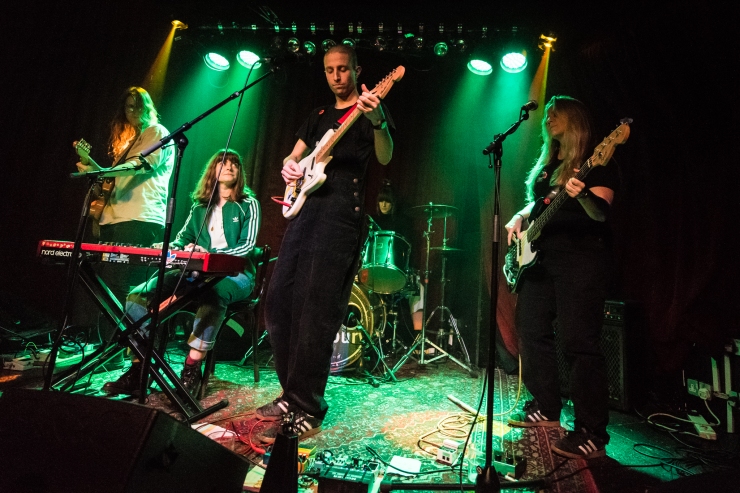 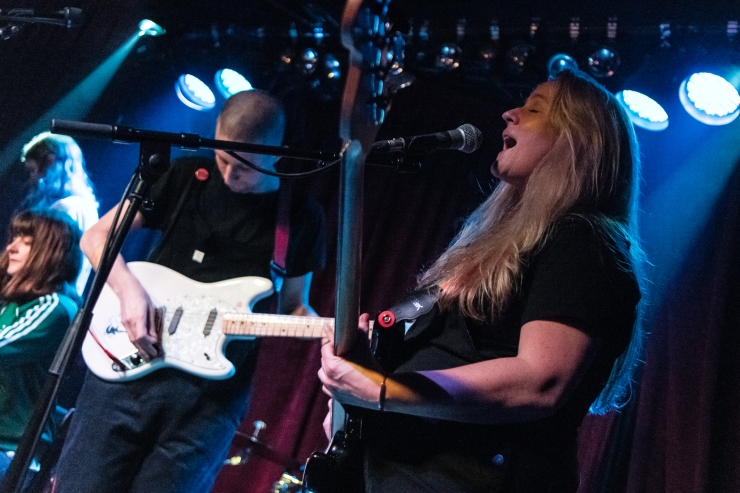 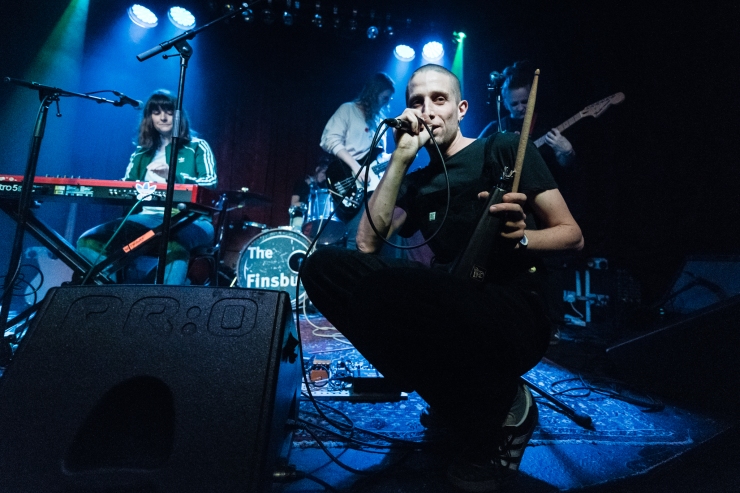 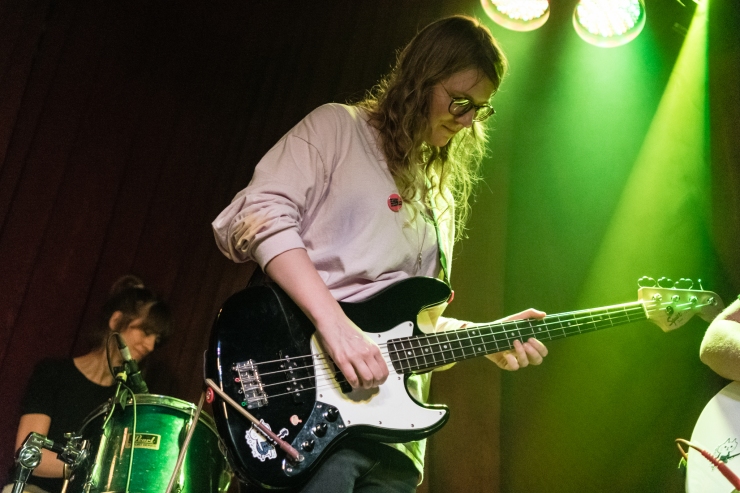 One of my ‘Ones To Watch’ for 2020, London trio Hurtling are third band of the night. With their sun-drenched whirring hooks and the swirling subtle power of Jen Macro’s (My Bloody Valentine) distinctive effervescent vocals, they deliver their fuzz-filled noise-pop anthems with a captivating, psychedelic haze. 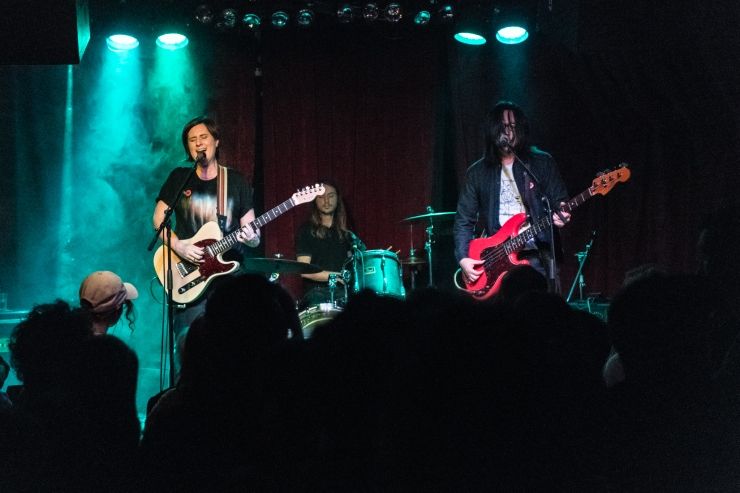 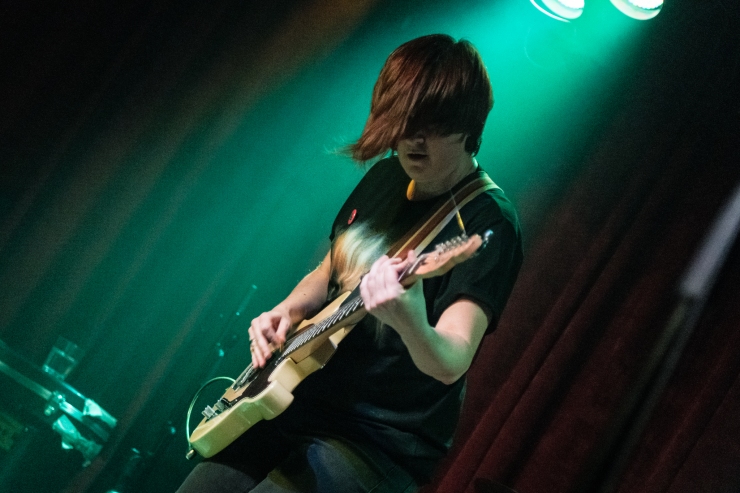 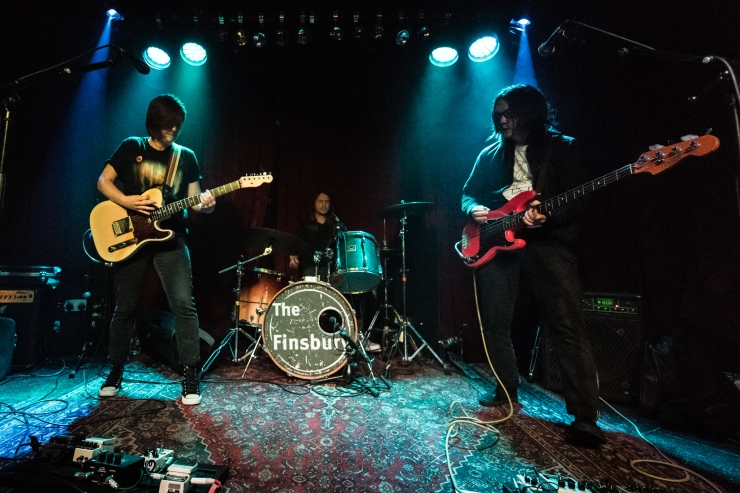 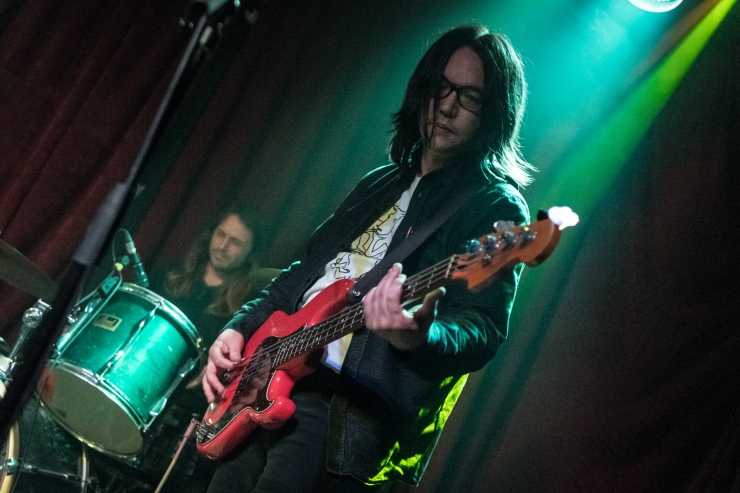 I’ve been keen to see headliners Personal Best for a while now, and they definitely don’t disappoint. With a joyous punk-rock energy, their “classic rock for tragic lesbians” fills the venue with adoring fans as immense, frenetic riffs are blasted out alongside pure pop harmonies and a sparkling energy. Drawing the night to a memorable close, front person Katie Gatt dedicates their set closer to the queer community. As a sea of buoyant voices joins in with “I wanna kiss you in the street, where everyone can see… ’cause this is what we look like”, the poignancy of the lyrics in these uncertain times is overwhelming, and an empowering sense of unity takes hold as the crowd heaves with bodies dancing and singing in solidarity. A really special end to what’s been a night filled with the most life-affirming vibes. 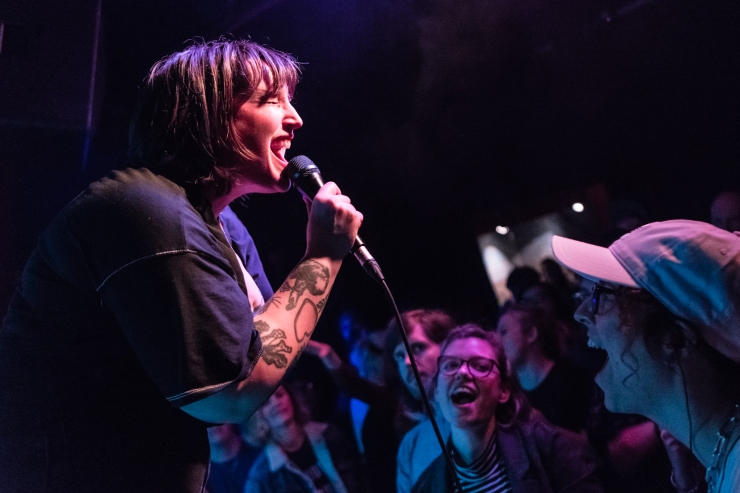 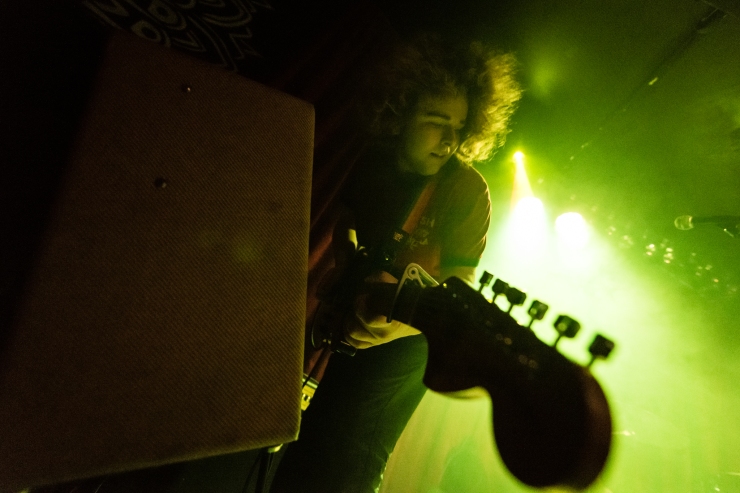 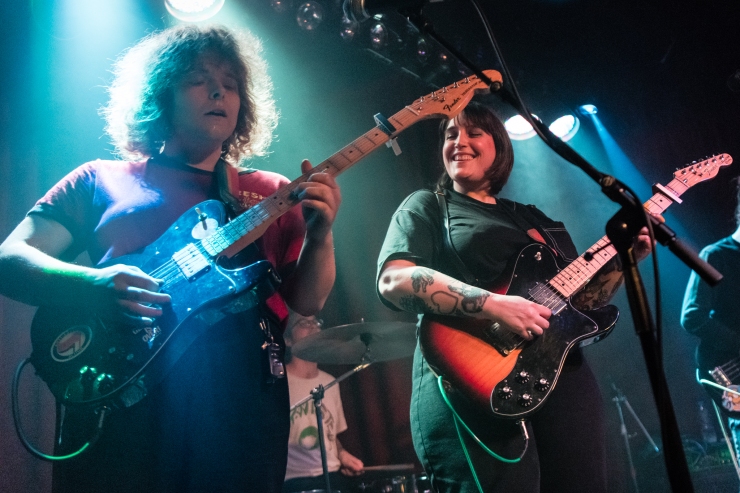 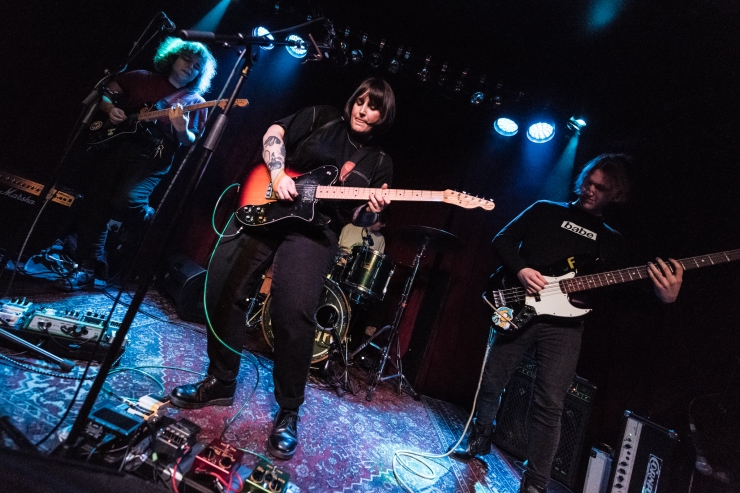 Massive thanks to the four incredible bands who played for us on Friday, and to all who came down and completely packed out the venue! Be sure to join us next month on 14th February, with Piney Gir, Grawl!x, Captain Handsome and I Am Her.

Following the success of latest single ‘Philadelphia’, and having recently charmed us once again with their spellbinding live set at The Finsbury, London based Gold Baby – now consisting of Siân, Scott and Sara – are back with their first offering of 2020.

A heartfelt meditation on what it means to care, ‘Dogbone’ oozes a shimmering musicality and quirky charisma as Siân’s raw, confessional lyricism flows, showcasing the impressive range of her luscious, crystalline vocals. Building to an emotion strewn grunge-pop anthem, it’s a dreamy, yet refreshingly gritty, lamentation on life’s anxieties.

Or listen on Spotify now.

‘Dogbone’ is out now. Catch Gold Baby live at the single launch at The Waiting Room on 17th February.