To celebrate International Women’s Day, illustrator Sally-Anne Hickman has created a wonderful tribute to one of the most innovative people in music, and all round wonder-woman, PJ Harvey. Turn ’50ft Queenie’ up loud and enjoy reflecting on this incredible woman’s career through these wonderful illustrations… 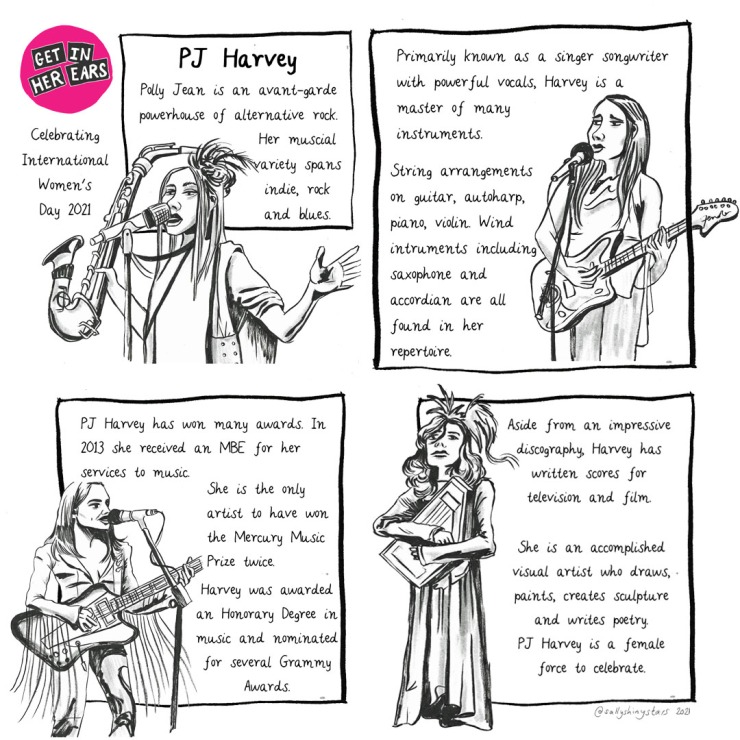 Following the blistering energy of their recent eponymously named single, London-based The Other Ones have returned to blast into our ears with a brand new offering.

Propelled by jangling guitars and front-woman Steph’s swooning, gritty vocals, ‘Forever Young’ reflects on that sense of yearning we all have, now more than ever, for younger, care-free days. With a swirling, euphoric energy and racing beats, it oozes a sunny sense of nostalgia as honey-sweet harmonies and scuzz-filled riffs create an irresistibly catchy slice of shimmering punk-pop. Of the track, the band explain:

“‘Forever Young’ is a song about yearning – about wanting to run away from a humdrum existence, going for a drive with your best friend, throwing caution to the wind, and living for yourself. It’s hard to capture that feeling of limitless wonder from childhood, but when you have the right person with you, anything feels possible.“

Reckless Yes Records · The Other Ones – Forever
Young

‘Forever Young’ is out on 5th February, and The Other Ones’ debut album is set for release on 26th February via Reckless Yes. To keep up to date with all the fantastic releases from the Reckless Yes label, why not become a member – more info here.

Counting the likes of Nick Cave and The Prodigy amongst their fans, and with acclaim from publications such as The Quietus and Kerrang!, London-based Saint Agnes follow last year’s EP The Family Strange with the announcement of a brand new mini album, set for release this Spring.

Taken from the album, new single ‘Repent’ instantly hits you with its ferocious, angst-driven force. Propelled by a seething drive and the immense, gritty power of front woman Kitty Austen’s vocals, frenzied hooks intertwine with thrashing beats, creating a perfect blast of raging, visceral energy that we need now more than ever. With its dark, relentless passion, it’ll leave you feeling empowered and ready to take on the world, seeking that “justified revenge” on anyone who gets in your way. Of the single, Kitty explains:

“‘Repent’ is a song born of rage. It’s the story of a fallen angel hell bent on revenge and retribution, and was inspired by being sick to death of people in positions of power getting away with nasty shit again and again and again. I think most people feel it, you look around and it seems like the ‘bad guy’ is always winning so the song is a blood-thirsty revenge fantasy about righting injustice.”

‘Repent’ is out now, and Vampire – the much anticipated upcoming mini album – is set for release 26th March via Death Or Glory Gang Records. Pre-order here.

In a loud and driving new single that has as much grit as it does sophistication, Maya Lakhani’s ‘The Line’ is a cathartic release that rings out like a staple alt-rock anthem. From the moment the track dawns, chunky bass and overdriven guitars swell ‘The Line”s mix and sets the scene for a grungy instrumental.

Crisp, hard-hitting drums keep the song grounded while Maya’s sharp and compelling vocals grab attention and never let go. “I’m always drawn to the darkness, things that rack my mind”, Maya sings with a purging tone. She alludes to the addictiveness of our personal demons with teasing lyrics and words of reflection. ‘The Line’ becomes transformative, however, as Maya describes that the tune is about learning to “set healthy boundaries and about starting again.”

This personal evolution is depicted emotively through both Maya’s words and the track’s speculative instrumental. With a thick heaviness reminiscent of ’90s bands such as Garbage, and the enticing solitude of PJ Harvey’s vocal performances, Maya Lakhani has curated a modern rock tune that feels DIY, yet is polished with a contemporary edge. ‘The Line’ is a taste of something new, served on a nostalgic platter.

‘The Line’ is out now. Listen here.