We’re almost out of Lockdown 2.0 here in the UK, but whether you’re feeling excited or apprehensive about the changes the new government measures will bring, our November playlist is here to help distract you. There’s an eclectic mix of alt-pop delights, atmospheric electronic soundscapes and some shimmering indie and alternative guitar tunes. Take some time to scroll through our track choices below and make sure you hit play on the Spotify playlist at the end of this post.

GENN – ’23rd March’
The latest single from Brighton based trans-national band Ġenn, ‘23rd March’ is propelled by whirring hooks, capturing the charismatic energy of the band’s magnificent live show, as it builds with a sultry power to a gritty grunge-fueled seething anthem. ‘23rd March’ is taken from Ġenn’s upcoming EP Liminal, set for release next year on Everything Sucks Music. (Mari Lane)

Nervous Twitch – ‘Tongue Tied’
The latest single from the Leeds three-piece, ‘Tongue Tied’ is a comforting ode to “Self-reflection and amazement over the contradictions in life”. Propelled by scuzzy surf-rock inspired hooks and an instantly catchy uptempo musicality, it’s a colourfully retro slice of uplifting punk-pop. ‘Tongue Tied’ is out now via Reckless Yes. (ML)

Tired Lion – ‘~Cya Later~’
Aussie band Tired Lion have just shared their new album Breakfast For Pathetics and it is SO. GOOD. I love frontwoman & guitarist Sophie Hopes’ voice and this track is apparently one of her favourites on the record – it also happens to be one of mine too. (Kate Crudgington)

Francis of Delirium – ‘Lakes’
“The main idea in ‘Lakes’ is that we are all fed by other people (or other “rivers”) to eventually form who we are, one large lake fed by other water streams, one community,” explains Francis of Delirium’s songwriter Jana Bahrich. Taken from their upcoming EP Wading, which is set for release next February, this single continues to show Bahrich’s talent for writing poignant guitar tunes about the interweaving nature of life. (KC)

King Hannah – ‘Meal Deal’
Liverpool’s King Hannah have just released a complete beaut of a debut EP, the magnificence of which is showcased perfectly in ‘Meal Deal’. Inspired by an unsuccessful flat-hunting mission, it’s steeped in an all-encompassing ethereal splendour as the utterly spellbinding majesty of Hannah Merrick’s vocals flow alongside swirling War On Drugs-reminiscent hooks. Tell Me Your Mind And I’ll Tell You Mine, the new EP from King Hannah, is out now via City Slang. Watch the homevideo for ‘Meal Deal’ here. (ML)

Serena Isioma – ‘Stop Calling The Police On Me’
“This song is about searching for peace outside of the society that doesn’t understand you,” explains Chicago-based musician Serena Isioma. “There was a heavy police presence in my household growing up. It was very toxic. Eventually, I stopped coming home altogether. I was much happier hanging out with my friends.” Isioma, a first generation Nigerian-American, neutralizes these hostile memories via ambient guitars and honeyed vocals. I’m so excited to hear their new EP The Leo Sun Sets, which is set for release in Feb 2021. (KC)

ZAND – ‘Inappropriate’
Self proclaimed “ugly popstar” ZAND has just released their new EP Ugly Pop, and ‘Inappropriate’ is one of several savage bangers on the record. ZAND’s wit and defiance in the face of their critics shines through in their candid lyricism and polished, yet punishing beats. (KC)

STRAIGHT GIRL – ‘Limón’
A vibrant, jagged electronic soundscape inspired by disjointed and self-critical thoughts, ‘Limón’ is the latest single from Leeds-based electropunk STRAIGHT GIRL. Released via Come Play With Me, the track is a cathartic new offering that sees the artist confront the darker parts of themselves and transform them into energetic, intensely danceable beats. (KC)

CIRCE – ‘Dancer’
An evocative dark-pop gem inspired by a morbid fascination with an infamous cult, London-based Circe’s latest single ‘Dancer’ is taken from her debut EP, She’s Made of Saints. The track is a sultry, cinematic tune exploring the dangerous yet seductive allure of Californian cult The Source Family. I wholeheartedly recommend you listen to Circe’s EP if you’re a fan of any of the following: The Handmaid’s Tale, David Lynch or Stranger Things. (KC)

October and The Eyes – ‘Dark Dog’
New Zealand-born, London-based songwriter October and The Eyes recently shared her debut EP Dogs and Gods, and this dark, sultry single is lifted from it. Speaking about the track, October explains: “It’s about the uneasy feeling of being watched, that at any moment something bad could happen. There’s an anecdotal malformed dog who’s always near – limping, snarling, growling and drooling. It’s one you feel equally sorry for as you do fear it. You cannot outrun this dark dog, so you decide to make peace.” (KC)

Elaine Malone – ‘You’ (1000 Beasts Remix)
A captivating, blissfully lo-fi new offering from two of Cork’s freshest talents, this is a beaut collaboration between songwriter & multi-instrumentalist Elaine Malone and electronic artist & producer 1000 Beasts. Led by Malone’s original beguiling vocals and lullaby-esque lyrics, 1000 Beasts has tentatively transformed the track with his distinctive percussion and the result is a magnetic soundscape that acts as an aural tonic for testing times. (KC)

Smoothboi Ezra – ‘My Own Person’
Smoothboi Ezra is an 18 year old songwriter, multi-instrumentalist and producer from Greystones, Ireland. This song is about “not being happy but not being able to do anything about it” which is the over-riding sentiment for most of 2020. I love this track and can’t wait to hear more from them in the future. (KC)

Jenny Moore’s Mystic Business – ‘I Am Afraid’
Reflecting on how being alone as a female identifying person can be both scary and exciting, ‘I Am Afraid’ is propelled by funk-fuelled bass-lines and an empowering, shimmering energy. As it builds with the twinkling power of voices uniting together in harmony and jangling, playful percussion, it’s a poignant, impassioned ode to female strength and resilience. ‘I Am Afraid’ is out now via Lost Map Records. Watch the joyous new video here. (ML)

Kama Vardi – ‘The Gate’
An uplifting slice of folk-pop, Kama Vardi’s ‘The Gate’ flows with a twinkling romanticism and joy-tinged lilting musicality. Oozing a captivating allure alongside the soothing splendour of Vardi’s vocals. Moonticket, the upcoming new album from Kama Vardi, is out now via Bread For Eskimos. (ML)

Having been firm favourites for a while, wowing us live with their live show on more than one occasion, Brighton-based ĠENN have just supporting Big Joanie on one of their tour dates in Leeds, and have now released their dynamic new single.

With a spunky spin on classic beach rock’s charm, ‘Du Da Dance’ brings listeners mighty rock energy. Kicking off with adventurous plucky bass and a vocal shrill, it is hard not to immediately bop along to the contagious and vital experience that ĠENN bring to the table.

Through a distinct vocal style during its verses, ‘Du Da Dance’ reflects vintage tones that date back to the ’50s. However, where ĠENN truly showcase their own unique sound, is during their punchy sing-along choruses. Here is where ĠENN fuse garage rock with a frenzied Riot Grrrl spirit, all under one pop-rooted roof.

The stylistic harmony that the band have created here is truly something special and sonically exciting for fresh ears. ĠENN’a team of four know how to embody their empowering personality not only with their lyrics, but their fierce instrumentals. The lively pulse of ‘Du Da Dance’ is relentless and ongoing, even ringing out during the song’s broken down outro.

ĠENN are putting down significant boots in several genre realms and calling upon a wide audience with their fearless charisma in this latest empowering offering.

‘Du Da Dance’ is out now. Listen on Spotify.

Following a host of amazing bands playing for us lately, including Chorusgirl, Witching Waves, CLT DRP, Crumbs and Mammoth Penguins, we were back at The Finsbury on Friday with another dream of a line-up, for a jam-packed night of the best new music.

Kicking things off to a joyous start are Breakup Haircut. Treating us to songs about everything from wanting to be a “greaser”, to not feeling cool enough to move to Berlin, their set’s filled with an uplifting buoyant energy and infectious punk fuzz. 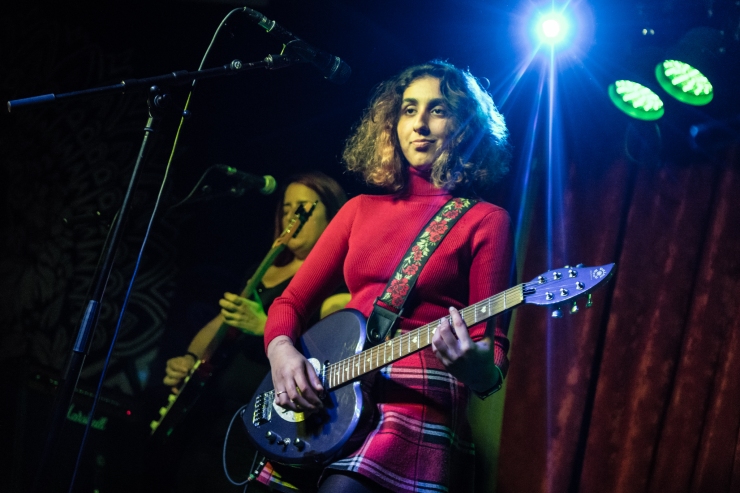 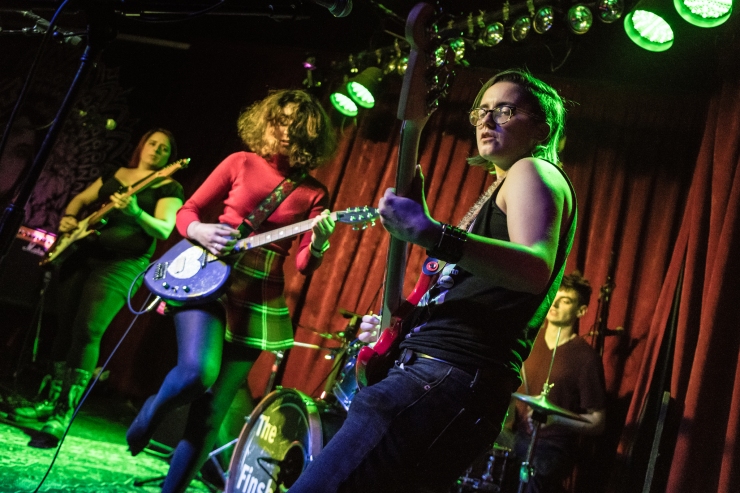 Next up, Bitch Hunt deliver their poignant offerings with stirring emotion. Covering themes of being non-binary, experiencing domestic abuse and general feelings of grief and being an outsider, they bring an impassioned energy and gritty power to an immense set. 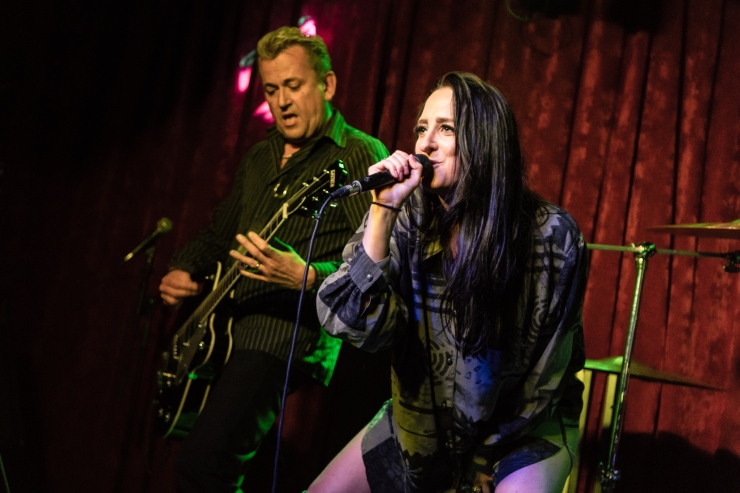 Having played for us twice before (under their former moniker Cryptic Street), it’s an honour to now have ĠENN headline for us. With their wonderfully eccentric charisma and immense, empowering spirit, they deliver impressive riffs and racing beats, enrapturing the crowd with their buoyant spirit, as vocalist Leona bounds across the stage in a whirlwind of joyous energy. Once again proving that they’re a force to be reckoned with, ĠENN deliver a memorable set that does not disappoint. 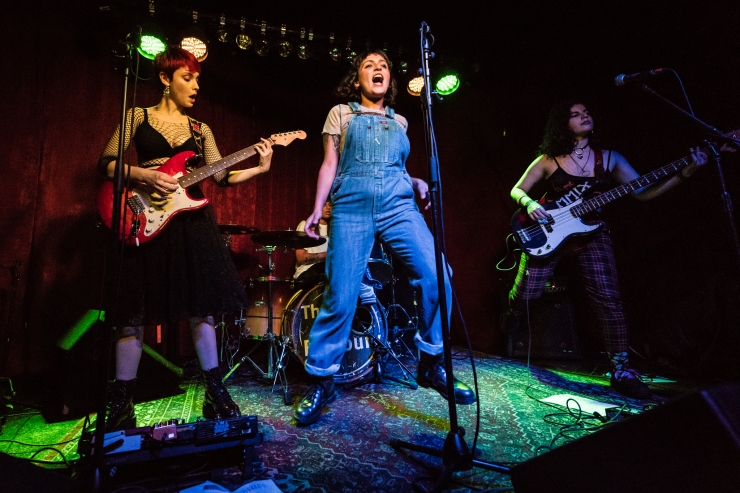 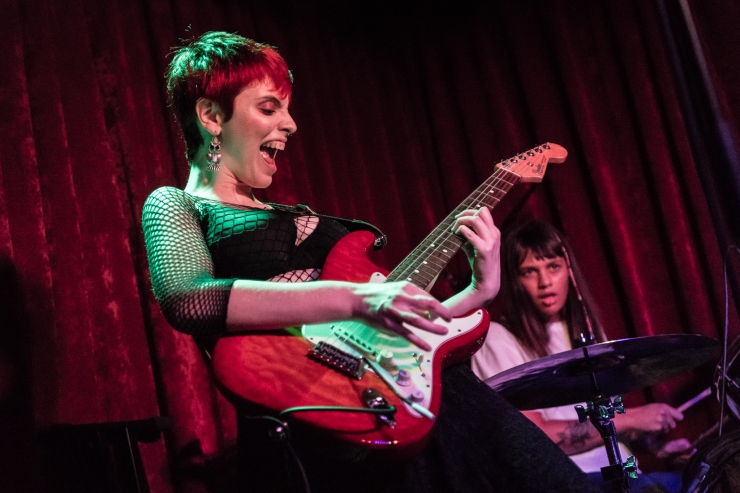 Massive thanks to all four bands who played for us on Friday! We’ll be back at The Finsbury on 8th November with a super exciting Secret Headliner, plus Cozy Slippers (all the way from Seattle!), Gold Baby and Macadamia Sluts. Not to be missed!