The Cluny is a bar and venue based in an old bottling plant between the Quayside and the Byker Bridge, seated at the bottom of Stepney Bank. I hoped the first time I got to see L.A. Witch live that it would be in a place exactly like this one: a split-level venue with echoes of its city’s industrial past.

Fittingly, I almost caught their Rough Trade East show at the tail end of last year. Anyone who knows Brick Lane knows how much of the area reflects what was once there, celebrating rather than belittling it. As far as interconnectedness goes, my personal L.A. Witch narrative remains on par.

L.A. Witch is one of the most exciting, fresh bands to come out of the west coast in a long time. They mix the British dream of Venice Beach and Malibu with the dark and dirty truths that lurk in the underbelly of every seemingly perfect town, and the marriage of their lo-fi beer-soaked-cabaret-bar-floor tracks to a floor of kids desperate to escape the realities of life with a good time is one that will last forever. 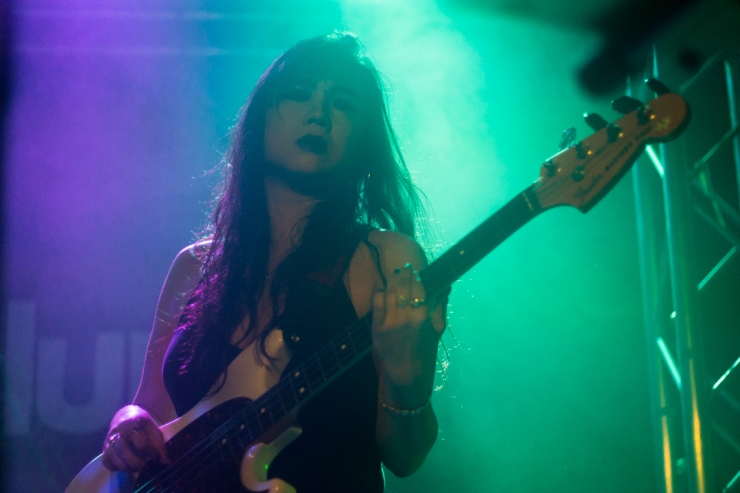 Seeing L.A. Witch reminds me just what a great bassist can do. They remind me of what a great drummer can do and a guitarist whose captivatingly lilting voice takes a backseat to the music in the sense of it being a gorgeous backseat driver that ties it all together.

L.A Witch play together like they’ve been playing together since the womb, and a good camaraderie can stretch miles in a world of male bands trying to outdo each other. Their songs — their act — is one of togetherness, of one, of all.

They are, by all means, a coven, and it’s a coven of which I would like to be a part.